The first year T and I lived together, I remember telling him that we needed to start our own Christmas traditions. It was during a conversation about what we were doing Christmas morning, when he told me that his family had asked if we could come over around 9am. 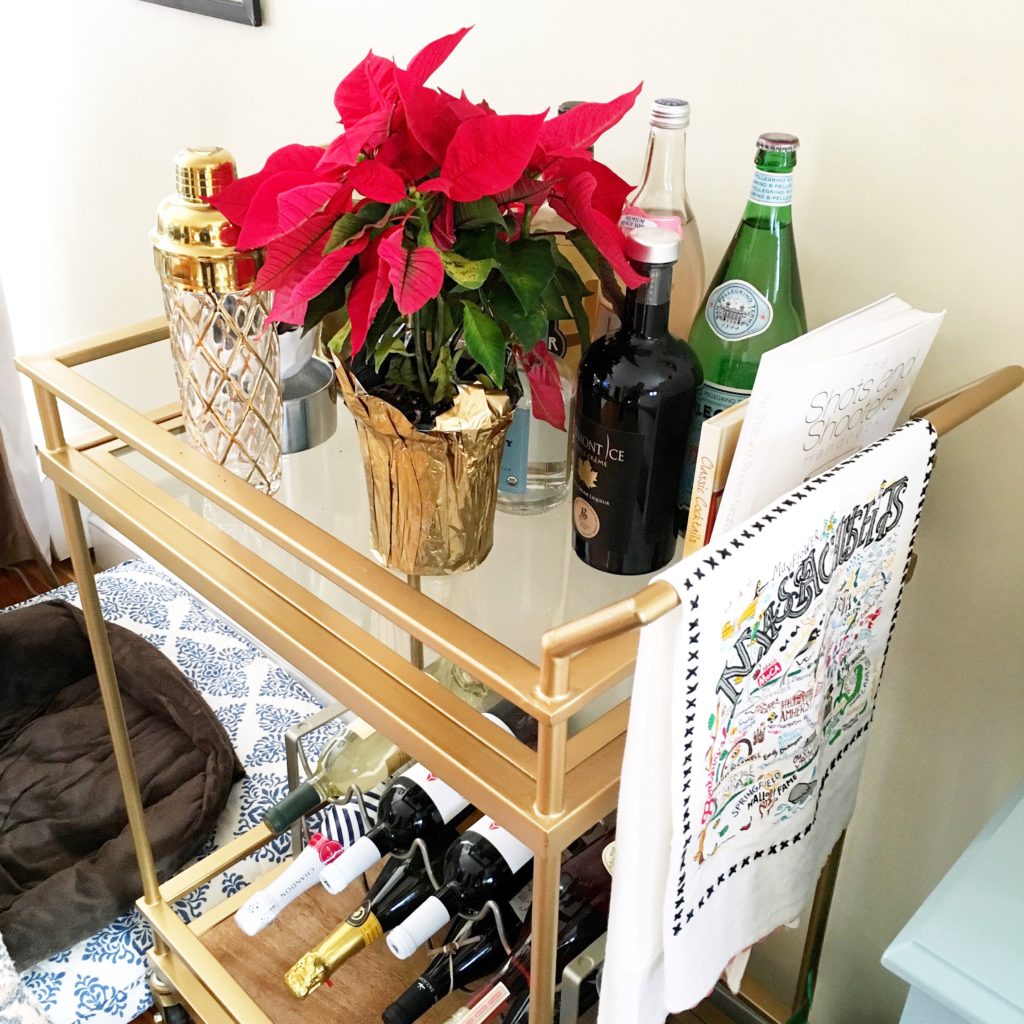 Growing up, Christmas morning for me was always spent in pajamas. My sisters and I (once we were past the stage of circling absolutely everything in the Toys R Us and American Girl Doll catalogs) would go downstairs in our pjs, grab a cup of juice or coffee, and make our way to the living room where we’d sit on the couch and pass gifts around. It wasn’t rushed, it wasn’t loud, and it was super calm compared to the Christmas mornings I’ve had since. It would be around 11am that we would head back upstairs to get ready for the day because we hosted Christmas supper at our house.

Since then, Christmas mornings have become a little less relaxing. As much as we try to make the morning calm, I can tell that both of us are a little anxious about getting a start on the day. (That might have something to do with the fact that we try to see all of the parents on Christmas Day, which is not easy. My parents are divorced, so that means we have to go to 3 houses instead of just 2.) We do, however, have a few holiday traditions that I love and hope will continue for years to come!

We started sending out a Christmas card the year we got engaged. Each year since then (this year will be our 4th card- you can see our first married card here!), we send a card with a photo of us and Sprout. I get really into the details on our cards, so much so that I ordered 3 different sets before finally deciding on one this year.

Every time T and I go somewhere new, we purchase a location-themed ornament to hang on our tree. I write the year in Sharpie so we can remember which year it was that we took that trip. Unpacking our ornaments becomes an entire evening, as we take out each one and talk about the trip we went on, the flight that was almost missed, the incredible experiences we’ve had. It’s so much fun to go back through them each year!

Growing up, stockings were kind of a big deal. My Santa would completely fill them so that stuff was falling out and propped up on the mantle. It wasn’t anything expensive, but things like coloring books take up a lot of space! I’ve tried to maintain that “overfill” mindset for our stockings, even though it can be really hard to find good stocking stuffers for guys! (I have no problem filling Sprout’s up!)

Since 2005(?) my friends and I have had a girls’ dinner the weekend before Christmas. It’s a little harder now, since two of the five of us live across the country, but it’s one of my favorite holiday traditions. For years we convened at the same restaurant each year, but that has changed since our families have moved out of our childhood homes, meaning that special restaurant is no longer just down the street.

The first time I went to midnight mass was probably when I was 12 or 13 and refused to go to this Christmas Eve party my parents always wanted to go to. Their friends hosted it, but the kids of their friends were just – well – weird. And mean. And I absolutely hated going, so that one year I cried until my parents agreed to let me spend Christmas Eve with my grandparents who lived in the same town as their friends. I hung out with them, helped make some food for the next day, and went to midnight mass with them. I remember thinking it was so special to have the church all lit up and beautiful, decked out for Christmas, while it was so dark and calm outside. (Bonus- if you’re Catholic, you know that midnight mass is usually the shortest of them all!)

Like I mentioned already, Christmas morning is a little hectic for us, but T and I have tried to make a point the past 3 years or so of doing Christmas morning just the two of us. We’ll get up, get some coffee, and spend time together in the living room, exchanging gifts and just hanging out. It’s some of my most cherished time of the holidays, because it takes me forever to pick out a gift for him! I would hate to exchange gifts in front of everyone, because I wouldn’t get to explain why I gifted what I did. (I really like to explain things.)

Supposedly this is a French Canadian thing (anyone else who can confirm?) but my grandmother (who, btw, was from Kentucky, part European and part Native American, and not at all French Canadian) used to make pork pies for Christmas Eve. (I mean, I guess it makes sense because my grandfather was 100% French Canadian?) She would spend hours in the kitchen making the pork and then went a step further and made that into a pie. I made these a couple of years ago and have decided to bring back the tradition. I’ll be cooking these up for Christmas this year!

I remember looking around for gifts for my college roommates and close friends and wondering how I was going to...