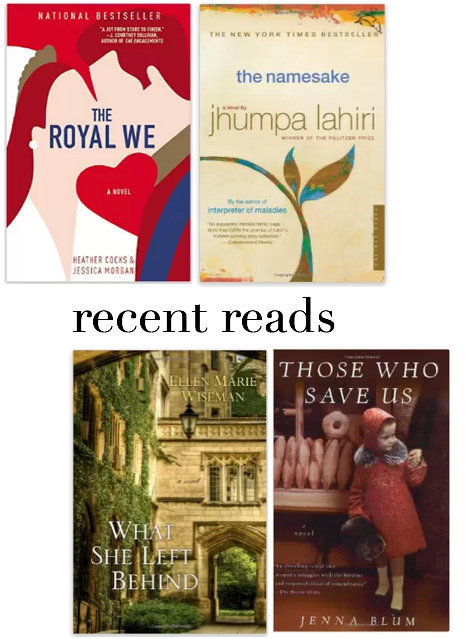 The Royal We by Heather Cocks and Jessica Morgan
I saw a review that Carly did on this book, then saw it at the top of the charts, so I thought I should check it out. It’s a light read, but I found myself in Pilates one day wondering what was going to happen next. It’s one of those books that I had a hard time putting down, so I was frequently picking it back up. Definitely a good Summer beach read!

What She Left Behind by Ellen Marie Wiseman
This story connects a modern-day teen to a 1920s woman put in a mental institution because she was in love with someone below her social status. This is a good vacation book because you’ll want to read most of it in one sitting!

The Namesake by Jhumpa Lahiri
I’m a big fan of books set in a place that I know, so I enjoyed having this one set just down the road in Cambridge, MA (aka where Harvard and MIT are located). I also found it really interesting to read about a culture that I haven’t experienced. This is a book that I think a lot of people can relate to, as the main theme is the character’s journey to finding himself.

Those Who Save Us by Jenna Blum
This is the first book I’ve read about the Holocaust from the German perspective, and I thought it was well done. It is Blum’s debut novel, and I would read another from her in the future. I did give this one a 3/5 on Goodreads, mainly because I felt like it jumped around a lot. It’s a slightly depressing story, so I wouldn’t recommend it for a light-hearted Summer read: Maybe save it for a time when you can put down and pick up the book over time to break up the story, rather than reading it in one sitting.

And one on my list…
One book I’m looking forward to is Rescue Road: One Man, Thirty Thousand Dogs, and a Million Miles on the Last Hope Highway, which I preordered (it comes out in October). It’s written about Greg Mahle, who runs Rescue Road Trips up and down the east coast to save the lives of dogs who would otherwise be euthanized in the south. I’ve followed his Facebook page for a while and love seeing the work that he does – so inspiring!

« Home Finds
3 Things You Should Do After Your Wedding »

I've been scouring the internet lately for the minor updates we're making in our home decor (mainly streamlining our home...