I recently read Marie Kondo’s book about decluttering, and I learned a lot – and not only about my closet. The concepts in her book are very simple, but putting them to use proved to be a little more difficult than I imagined.

FOLDING
There is a pretty specific way of folding items that leaves them all visible (and vertical). And it is a process. Each drawer took me about a half hour of folding time, plus then there was the debacle of what to get rid of from each drawer when not everything fit. 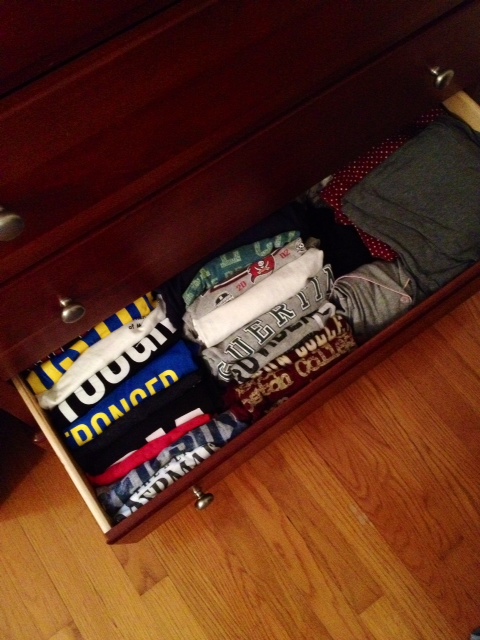 I won’t even tell you how many t-shirts I had stuffed in that drawer before my clean out!

ONE CATEGORY AT A TIME
I had the most trouble with the idea of taking care of one category at a time. For example, I started with magazines, so I had to gather every single magazine that was in my house and go through them at one time, rather than going through magazines in each room. (Not that I have that many magazines, but think about it in the context of gathering every single piece of clothing that exists in your house or apartment, including coats and dresses and off-season items.) For the rest of the categories, I did them room by room… it was too mentally exhausting to picture all of my clothing items in the house in one place!

PURGING
I’ve never been great at getting rid of things, so getting rid of anything that I wasn’t completely drawn to was a terrifying ordeal. The book talks about not hanging onto anything for sentimental reasons or because you might need it someday. But what about my college sweatshirt (that I haven’t worn in years)? Or my kindergarten report cards (seriously…)? Luckily, I did this on a day I wasn’t feeling too sentimental at all. I highly recommend doing this decluttering when you are in the mood for it – otherwise, you probably will find yourself back at square one!

DON’T LOOK BACK
Never mind my family members trying to hang onto stuff, I’m the worst! Once I put items that I wanted to get rid of into bags, I took those bags right out to my car and drove them to the donation center. I knew that if I held onto them or waited a little while to donate those items, they would probably end up right back where they were.

I also learned that I have my own way of getting rid of things, and I don’t think Marie Kondo’s way is right for everyone. For example, she says to get rid of anything you have multiples of. But ever since going to Catholic school (and wearing uniforms), I wear tank tops under almost everything, so I have a lot of tank tops in dark colors and light colors. It wouldn’t make sense for me to get rid of the multiples, because I would be doing much more laundry. Also, like I mentioned, the idea of having all of my clothing in one place was entirely too overwhelming a thought for me, so I did it in chunks instead: Though this isn’t what is prescribed in the book, it worked for me. At the end of the day, I took out 4 trash bags: 2 of clothing and shoes and 2 of unnecessary papers I was holding onto. Even though I didn’t do it the way the book said I should, as long as it works, you’re doing it right!

Have you tried this “art” of decluttering and tidying up? How did it go?

Here are my latest home finds that are bookmarked for future purchases. I love the look of nesting tables and...