It has been one month since Eleanor entered our lives, and to say the past month has been a whirlwind would be an understatement. 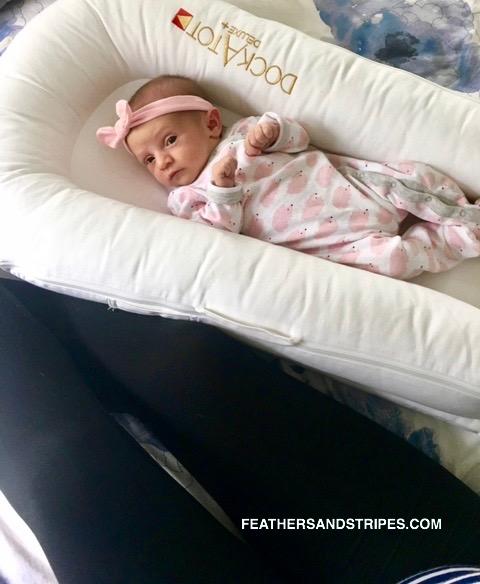 My third trimester felt like it absolutely flew by, and I didn’t anticipate how fast the first few weeks of being a mom would go by, too. The day E turned 3 weeks old, I was sitting there thinking about how I had wanted to dress her up and take some newborn photos, and I kept forgetting or something would get in the way. Days kept going by, and I still haven’t done it!

When they say “The days are long, but the years are short,” they’re not kidding.

T was on paternity leave for two weeks, which was incredible. I seriously don’t know how I would have done anything in those early days without his help at home! I’ve always felt that the US needed to get its act together with parental leave, and I feel that way now more so than ever. Expecting a woman to go home with a brand new baby and care for that infant alone while she’s recovering from a major body trauma is just not realistic.

But I’ll get off my soapbox for a little bit, because this post is all about E!

I’m so much more relaxed as a mom than I ever thought I would be, and I think it has to be because Eleanor is pretty “go with the flow” as far as babies go. She doesn’t mind being put in her car seat, and she could be happy being on the move in the stroller or snuggling up on the couch. I read a couple of books that suggested putting a newborn on a schedule right away to help them differentiate between night and day (since newborns have no concept of the difference when they’re born), but we’ve just been going off of E’s cues. If she’s hungry, we feed her, and if she’s tired, we let her sleep. (The only caveat to that is that if she has been asleep for more than a certain amount of time, I will wake her up to eat. Otherwise, she’d be up all night!)

I keep thinking how much of a full-time job it is being a mom, and I have so much respect for anyone who can do this alone. I selfishly cannot wait for T to come home in the evenings so I can have a few minutes to myself, even if it means I’m doing laundry!

I’ve noticed that I have a bit of mom guilt, where I feel like I should be doing a or b or c when in fact I’m snuggling my babe and lying on the couch. I keep reminding myself that this is my most important job right now, and if that means the house isn’t always perfectly kept or the laundry isn’t done, it’s not a huge deal. I read somewhere that “you’ll have a child forever but a baby for just a year” and so I am trying to really savor the time I have at home before E grows up!

Eleanor is still in mostly newborn sized clothes, though she is in some 0-3 months sizes (like these zip ups that I LOVE). She’s still a little peanut! As for my size, I gained 55 lbs while pregnant with her (yep…), and I knew it was not going to go away overnight. I’ve been living in my favorite high-waisted leggings which hide my mom pooch. I’m totally embracing the athleisure trend since my days are spent mostly at home, with family members or friends, or out running errands with E. I can’t wait to start working out again as soon as I’m cleared. I’m toying with the idea of doing BBG – has anyone done it?

We really don’t have a set schedule yet, and we haven’t tried to put Eleanor on one at all. Like I said, we’re just going with her cues! Lately, we’ve been having a fussy period in the early afternoons where E fights sleep and then gets overtired. This is probably the most challenging part of the day for me, because nothing seems to help her settle down, and oftentimes it will be a couple of hours before I can get myself some lunch. The other day I was actually contemplating how I could teach my dog to get food for me on command!

A typical day for us during the workweek looks something like this:

1am and 4am are middle of the night feeds with a diaper change. She eats and then goes right back to sleep.

7/7:30am we are up again for a feeding, and then we will either go back to bed until 9ish or I’ll catch up on the news while E snoozes on my chest and then I’ll put her in her Rock n Play or bassinet while I shower and get ready for the day.

This is when we might head out to run some errands! I try to get out of the house at least once during the day. The first couple of weeks I was just at home because I was a little too nervous to take her out by myself, but now we will either go for a walk or go to a store. She falls asleep really fast in her car seat and will sleep for forever if I don’t wake her up!

12-2pm is the fussy period lately, and E will eat and then will fight going to sleep for a while. I downloaded the Wonder Weeks app and it says she’s going through a leap right now, so I’m hoping this fussy period will stop soon! It’s stressful to have your baby crying and not know what to do!

4pm E is up again to eat and then she will be pretty alert, so we’ll do tummy time on her activity mat or I’ll talk to her or sing to her. She might spend some time in her swing (she loves the mobile and the music!). She will be up for about an hour and then will take another nap, usually in her DockATot, getting up around…

6pm up again to eat, just in time for T to come home and hang out with her while I do laundry/clean up the kitchen/get dinner ready. We’ll eat dinner with her in her seat in the dining room with us, and then we might go for a walk in the neighborhood with Sprout and the stroller.

8pm we might watch a TV show or start a movie and just hang out as a family! I try to cluster feed E at night so that she’s nice and full when she goes to bed. Some nights I’ll go to bed early and T will stay up with her to give her a bottle before he puts her down and heads to bed. If she eats around 10pm, she will definitely wake up by 1am, but if she eats later (around midnight), she may not wake up until 3am or so.

Overall, Eleanor eats pretty much every 2-3 hours. She’s tiny, and we’re trying to help her grow somewhere around an ounce a day, so it’s important to us that she’s getting in a lot of feedings during the day. I’m not sure what an “average” one month old’s schedule/day looks like, but this is just a glimpse into what our life looks like right now!

I’m going to put together a post on registry items and the items we use every day. If there are any other topics you’d like to see, let me know!

It's been 2 weeks since little Eleanor entered our lives. She's an absolute angel, but mom life is an adjustment....