I was overjoyed when we found out that we were pregnant again, but soon I started to worry what would happen when we transitioned to 2 kids. (At first I called this post “going from 1 to 2 kids,” but the reality is that it is truly a transition for the whole family.) 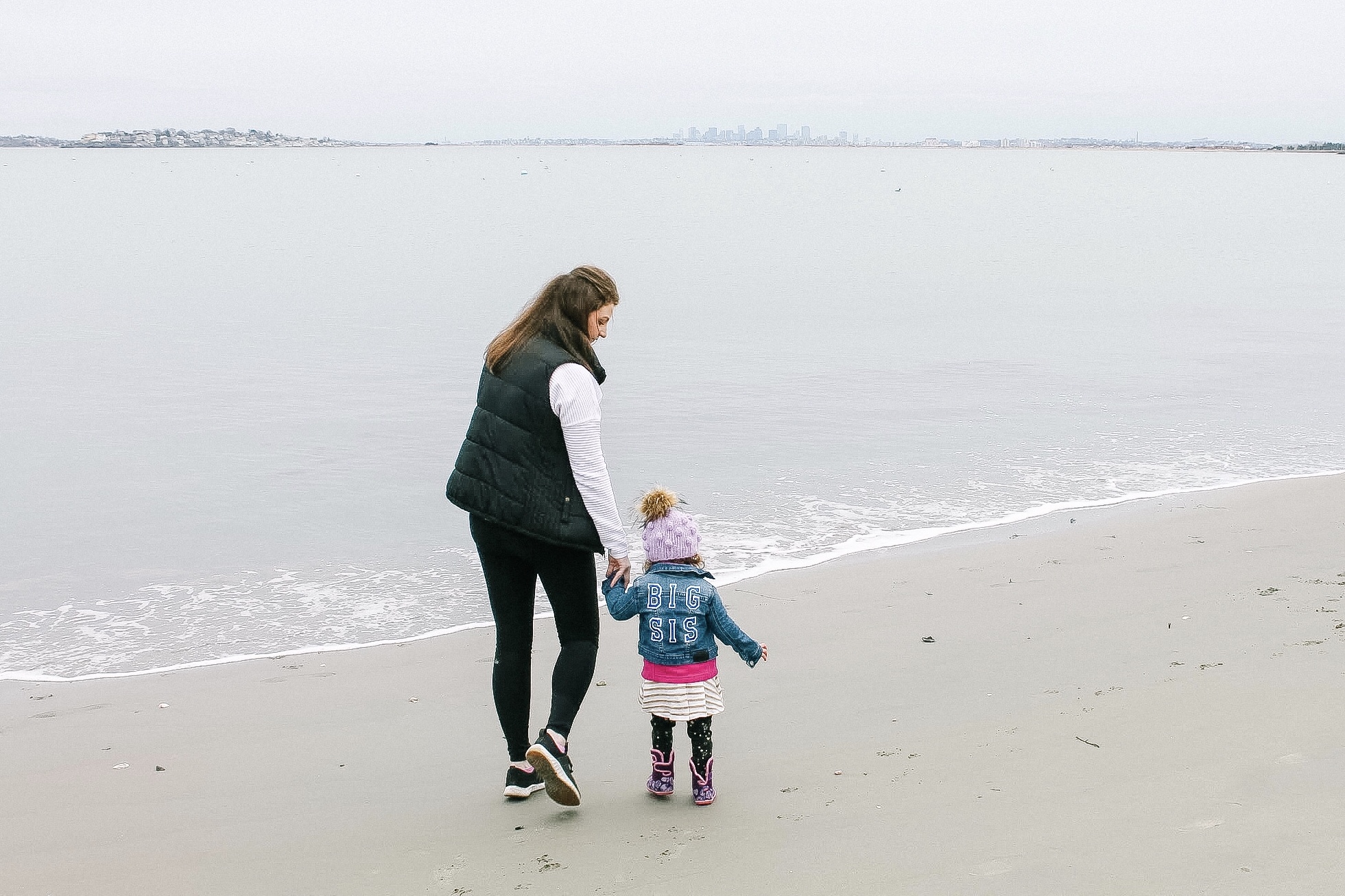 When I was still pregnant, I worried about a few things… Would my firstborn be okay with a new baby in the house? Would she feel pushed aside? Would the new baby get enough attention? How could I love someone as much as I love my “little big girl”?

Now that we’re over four months into having 2 kids, I thought I’d share some (hopefully) helpful advice on the transition from 1 to 2 kids and some lessons learned. I’m sure that things may look different a year – or even a few months – from now, so this is just based where we are right now.

Here’s what helped us in the transition to 2 little ones: 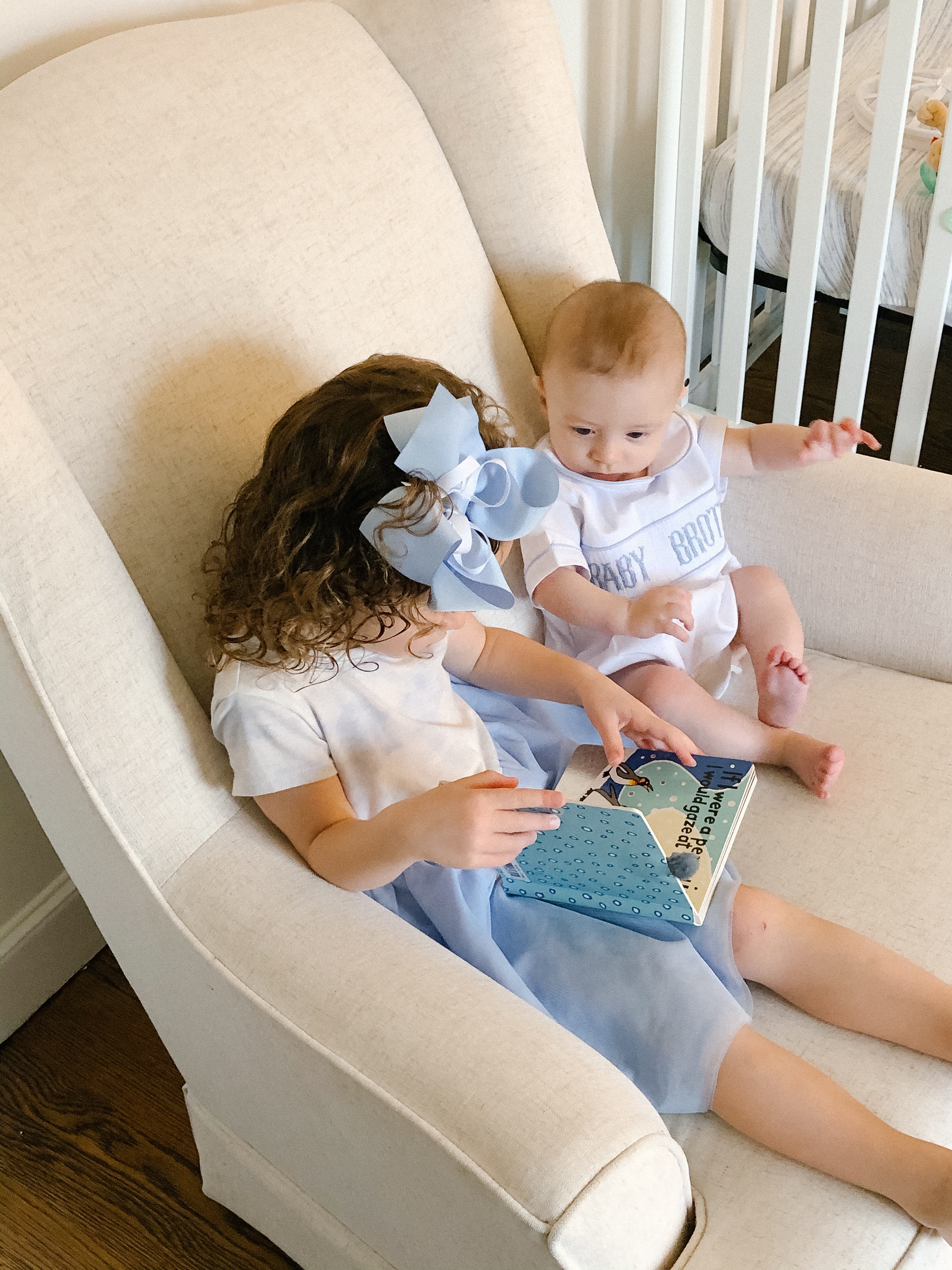 As time went on and I got bigger (and more tired) in the third trimester, I tried to encourage more independent play at home. Obviously this is something that comes with age, so if your kids are very close in age it may not be feasible at the beginning. I set up our play area with things E could do by herself, which included a play doh station. She was 2 years and 10 months old when Baby B was born, so it was the perfect time to start more independent play.

Read about the baby together.

We introduced E to the idea of being a big sister with a book. She knows other kids who have siblings, but most of her friends are actually the “baby” of the family. We talked positively about her friends and their older siblings, pointing out how they get to play together at home and share their toys and books.

She loves reading this book, because she thinks it looks like her!

Try a test run before you go into the hospital.

Our firstborn had only been away from us overnight once, nearly a year before the new baby was due. We tried out a “test run” a few weeks before Baby #2’s arrival. She had a sleepover at her grandmother’s house (where she would be when we were at the hospital). Her night was so much fun that she kept talking about going back. Little did she know that would happen sooner than later!

Point out “big sister stuff” that the baby can’t do.

Our firstborn is somewhat competitive, so she loves when we point out things that she can do but the baby can’t. All summer she took her “projects” very seriously, whether it was helping water the tomato plants or get the mail. She still frequently tells Baby B that she can do things because she’s the big sister, and “someday when you’re bigger” he will do them too. (It’s pretty cute.)

Send a gift from the baby.

Before we were admitted to the hospital I sent a gift “from” the new baby to E at her grandmother’s house. It wasn’t anything big… just a coloring book based on her favorite show and a new pack of crayons. But those 2 days we were in the hospital, she sat and colored for hours. The new baby sending her a gift made her even more excited to meet him in person.

Don’t blame the baby for needing your attention.

Saying “I can’t, the baby needs me” is so tempting, but I try to limit how often I say that. The last thing anyone wants is for the big sibling to feel pushed aside by the new kid. I read somewhere that you should sometimes add in, “Just a minute, Baby, I’m helping your big sister with something,” so your attention doesn’t feel one-sided to the big sibling. (I try to do this!)

This is a personal thing, but I’m trying really hard to get on the floor and play more, even when there are dishes to be done or I’m just tired. For a few months I couldn’t easily get on the floor (I was nauseous, or I was just tired from pregnancy) to play, so I want to make up for that now.

One of E’s jobs in the early days was to bring me a clean diaper when it was time for a change. The one time I absentmindedly grabbed one, she cried in protest saying that it was her job to get his diapers, not mine!

Even if it takes double the amount of time, let your helper have a job. The more they feel included, the better off everyone will be. (Believe me, it can take a while sometimes. Currently E’s favorite job is to wash B’s feet during his bath. She takes her duties pretty seriously.)

Once we settled into something of a routine, things were much easier.

Probably the hardest days were in the early days when B had to be admitted to the hospital for jaundice, and not only did we not know what day he was coming home, but then we had to explain that to our not-quite-3 year old what was happening. A new baby and no sleep plus pregnancy hormones plus medical stuff… sheesh!

Accept that it’s not going to be perfect.

This is probably my biggest piece of advice in the transition from 1 to 2 kids. It overwhelmed me to have a newborn and a toddler at home at first. I remember my husband saying he wanted to go for a run and having an internal freak out. I didn’t know how I was going to handle two at once. But once I accepted that I wasn’t aiming for perfection, things felt a lot easier overall. Now, I’m perfectly fine on my own with both kids.

Having a baby during covid wasn’t the easiest (more on that later), especially since we weren’t allowing anyone in our home right when we brought the new baby home. With our firstborn, we had the requisite visitors and occasionally I even handed the baby over and went to rest. That wasn’t an option this time.

I learned that I needed to ask my husband for help more often. I couldn’t just “nap when the baby naps” like I did with our firstborn, because I also needed to pay attention to my daughter (who dropped naps over a year ago). One absolutely wonderful thing about this postpartum period was that my husband had an extended parental leave. I’ll forever be grateful to his company for their progressive views on parental leave, because I truly think it made all the difference for both me and our little girl to have him home so long.

Now that we have been a family of 4 for 4 months, I can’t really remember what it was like before Baby B joined our family! Even on my most sleep deprived nights, I remind myself that it will be how it is supposed to be. If I’m meant to never sleep again, I’ll just invest in a concealer company. Jokes aside…

You will get through the transition period. It might be tough at first, but you can do this.

Remember when Black Friday and Cyber Monday were two distinct days, where you either shopped in person (Black Friday) or...